Tonight, my wife and I invited friends over for samgapsal, a Korean barbecue of what could be mistaken for bacon. To go with this, I wanted a beer that reminded me of either Cass or Hite, the two most common Korean beers. Since Korea looked to the success of the American beer industry in developing its recipes, I decided to go with an American classic, Budweiser.

Now, I worried about this review for several reasons. First, I didn’t think I’d like this beer. I might have gotten a bit hoity-toity with my beer preferences over the years, and I think the last time I had a Budweiser was when I was in college and first sampling the gods’ nectar. Second, I really didn’t think I could say anything about Budweiser. It’s the King of Beers after all. Everyone already knows what a Budweiser tastes like. And third, I worried that, since this is one of the first beers on this blog, it would point me in a direction I didn’t want to go. Well, I’m not worried about any of this anymore. 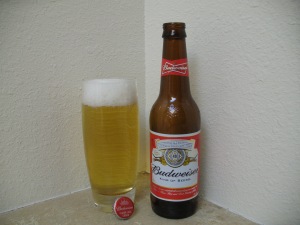 Budweiser was surprisingly enjoyable. It’s a very clean beer with a pleasant, mild flavor. It’s not too thin and just a little sweet. It’s smooth and quite refreshing. I’m actually very pleased with it.

Would I buy Budweiser again? More than likely since it’s sold everywhere and good in a pinch. Would I crave it when thinking of a beer? Probably not. Finishing up this beer, I’m reminded of the old saying to not judge a book by its cover. I’m much more pleased with this beer than I expected to be.