Dos Equis is a Mexican brewery producing two different beers; a lager and an amber. Although, I could swear that I remember encountering a wider variety over the years. I’ve noticed that their Lager Especial has been appearing in a variety of mixed packs that I’ve seen lately. (I’ve been looking at a number of mixed packs since it seems like the best way to make progress with this project.) In fact, this beer was one of the 18 I received in my 18 Beers of the World mixed box my wife recently bought me.

Coincidentally, I already had a 12-pack of Dos Equis Lager Especial in the refrigerator chilled, which I had bought before the mixed six that I’m currently reviewing. I decided to look at this beer today before moving any of the new international beers to the fridge. After all, I still have four beers from that mixed six-pack to drink. There’s nothing like having a ton of beers lined up waiting for you. 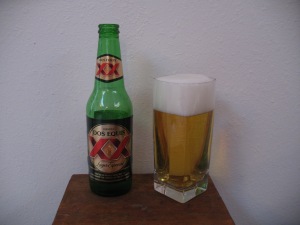 Pouring this beer revealed a clear, golden brew with a lot of head. It was both crisp and dry. The flavor was very light, almost to the point of being thin. However, the beer was quite refreshing. This would be a great beer to unwind with after a long day of hard work or outdoor play.

Would I buy this beer again? Probably. There’s nothing super special about this beer that would leave me craving it, but it often goes on sale, and a deal’s a deal. Should you try it? Well, if you like a super light tasting beer, sure. It’s a bit too thin to highly recommend, but it’s not bad. And it is very refreshing.